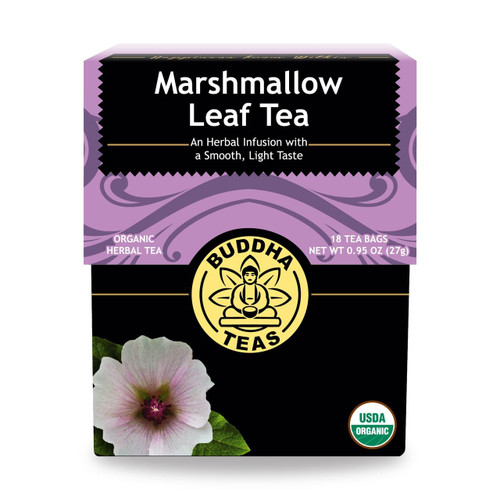 The marshmallow plant, also known as the marsh mallow, is a species of flowering herb that originated in Africa and now grows in damp places around the world.

The herb (not the pillowy sweet treat!) marshmallow is the go-to ingredient when dealing with many gastrointestinal and respiratory issues. Its magical mucilage property gives it a glue-like quality that has lent this often overlooked herb the reputation as a necessary inclusion in the cupboards of herbal tea aficionados around the globe. And though the eventual candy marshmallow began its evolutionary journey as long ago as 2000 B.C., today, the sticky sweet treat is a far cry from the beneficial form of Buddha Teas Marshmallow Tea.

Don’t be fooled by the somewhat pungent scent of this tea; its flavor is root-like, earthy, and deeply soothing. While drinking your cup of Buddha Teas Marshmallow Tea you might be reminded of a cool afternoon, strolling alongside a lush and fertile marsh, as egrets and ducks float and dip into the refreshing water. You know you’re giving your body a healing moment as the warm, golden liquid helps quiet your mind.